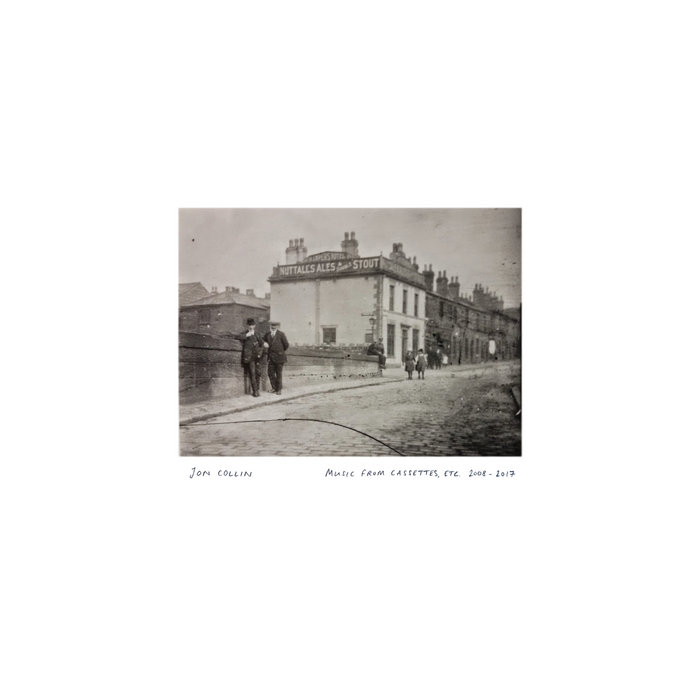 'A collection of material from old cassettes, CD-r releases etc from the English guitarist Jon Collin. Now based in Stockholm, Sweden, Collin has besides issuing several limited releases on his own Winebox Press/Early Music imprints also released several volumes of the ongoing 'Water And Rock Music' series on Feeding Tube Records. Swirling and absolutely mesmerizing instrumentals often incorporating field recordings, alternating between acoustic and electric modes. 'Music From Cassettes' was initiated after witnessing Jon Collin perform at a birthday party in Gothenburg 2019, one of the last truly memorable pre-Covid shows in town. Pulling shining diamonds from his discography and putting them in a new context with more recently recorded segments, Collin has carefully edited and sequenced the recordings to flow like a album. Pressed in 300 copies. Insert with liner notes by Byron Coley and Jon Collin. Vinyl master by Giuseppe Ielasi. Fördämning Arkiv 6.

"From 'John Train's Blues', with its classic Charalambides amp-hover, to 'Was That Me (Part 2)', which sounds like what might have happened if Manfred Eichner had asked a bumblebee to record a solo album in '74, to 'From the Portico Library', which builds a sky-bridge between Hendrix and Connnors, the music here is unifomrly superb." - Byron Coley'

Bandcamp Daily  your guide to the world of Bandcamp